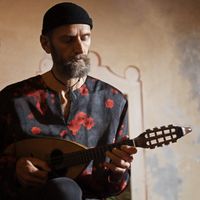 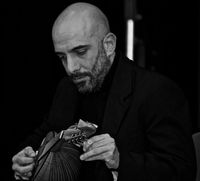 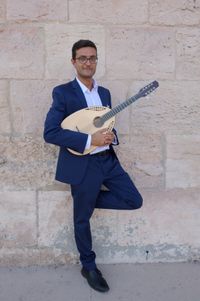 Carlo Aonzo - Director
Carlo, well-known as international concert performer throughout Italy, Europe, Japan and the USA, is one of the most important representatives of the Italian classical mandolin. To share and spread his passion, he founds in 2006 the Accademia that he still directs with ever growing success.... www.carloaonzo.com

His lyric voice, good sense of humor and versatile instrumental skills have earned him widespread recognition in folk and traditional music circles in the USA. On fiddle, mandolin, guitar, banjo, keyboard and ukulele, John demonstrates a vast knowledge of musical traditions. He is on the music faculty at Bennington College in Vermont and Skidmore College in Saratoga Springs, NY. John has performed with notable artists and, in addition to his group, Quickstep, he continues touring with the Susquehanna String Band. John has also worked for many years in recording studios as a musician and producer.... www.johnandtrish.com Michele De Martino - Mandolin
Graduated in mandolin with highest honours from "C. Pollini" conservatory in Padua, he has held concerts in France, Germany, Switzerland, Spain, Greece, England, Luxembourg, Portugal, Albania, Poland, South Korea, U.S.A, Argentina, Uruguay, Brazil, Egypt, Algeria, Qatar, Libya, Slovenia, Croatia and Serbia. He has made several radio and TV recordings both for Italian and foreign broadcasting stations. He has performed, as a soloist, in important musical groups such as: "Opera House" in Rome, "Maggio Musicale Fiorentino" in Florence, "Teatro Verdi" in Salerno, "Lyric Theatre" in Cagliari, "Janacek" in Praga, co-operating with famous conductors such as R. Muti, Z. Metha, D. Oren. He has co-operated, since 1996, with the "S. Carlo Theatre" in Naples. He founded the Motus Mandolin Quartet with whom he recorded the album "Calace: Music for Mandolin Quartet". 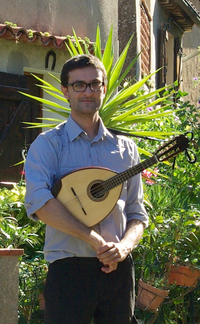 Born in Ischia (Naples, Italy) in 1980, he graduated in mandolin at Naples Conservatory and then specialised at the ENMD in Argenteuil (France) with the concert player Florentino Calvo and at the Conservatoire de Esch-sur- Alzette in Luxembourg with Juan Carlos Munoz. He also studied composition at Naples Conservatory, writing and analysis at the Conservatoire de Montpellier (France), early music at the "Centro di Musica Antica La Pietà dei Turchini" (Naples) with Mauro Squillante. He collaborates with many national theatres and orchestras in Italy and France (San Carlo in Naples, Opera Garnier in Paris, Orchestre Symphonique de Montpellier, Maggio Musicale Fiorentino, Teatro Lirico of Cagliari, Orchestre de Radio France, Chorégie d'Orange, etc. ), working with such famous conductors as Rostropovich, Berio Renzetti, Santi, Garforth, Pahn, Foster and Chung. As a soloist and "chamber musician" he has performed in Italy, France, Malta, UK, Netherlands, Germany, Austria, Spain, Czech Republic, Luxembourg, Estonia, Belgium, USA, Israel, etc. From 2012 to 2017 he is member of the international quartet "Kerman Mandolin Quartet", which brings together 4 soloists from 4 different countries (Israel, Italy, France, Spain). He is currently a member and co-founder of the Quintette à Plectres de France. His discography is extremely varied (15 CDs) and ranges from contemporary repertoire, to baroque and classical music, including music from popular traditions (Italy, Brazil, Argentina). In 2009, 2014 and 2021 he is "mandola tutor" of the international project "EGMYO" (European Guitar and Mandolin Youth Orchestra). In 2012, he won the first prize in the José Fernandez Rojas composition competition (Logrono, Spain). As a teacher, he frequently gives mandolin and ensemble music courses in France and abroad with orchestras and in mandolin festivals. He is mandolin teacher at the Conservatoire Béziers Méditerranée (France). www.fabiogallucci.net 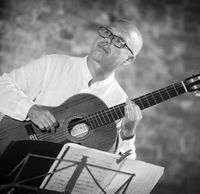 Graduated in Classical Guitar with highest honor at the Conservatory “Niccolò Paganini” in Genoa, he attended international specializing courses with Maestro Guillermo Fierens and obtained the V level Diploma for Suzuki method. Since 1988 he has performed as soloist and in different chamber music ensembles in Italy and abroad collaborating with Italian Institutes of Culture and concert organizations; He has given many concerts with various programs in Egypt, Tunisia, Canada. He has played for Fred Bongusto, Umberto Bindi and Joe Sentieri and has participated as musical guest in Rai Tv show “Mestieri di Vivere” in 1998. Since 2007 works regularly for Fondazione Arena di Verona; since 2011 he leads the Guitar Ensemble “Lia Trucco” and, from 1999 to 2013 with Maestro Alberto Fantino he was guitarist in the QUINTETTANGO group, performing in historical venue of the Italian Tango tradition as well as important concert halls; this ensemble released three albums and took part in many Tv and radio broadcasts. First prize winner for the Argentinian tango category at The Music Word Competition in Fivizzano (2000), finalist at the Astor Piazzolla music contest of Udine (2002), since 2000 he works with the singer Norina Angelini presenting the repertoire of the famous Duo Piazzolla-Milva. He teaches guitar at the Istituto Comprensivo Quartiere Moretta di Alba (Cn) and the Civico Istituto Musicale “G.B. Fergusio” in Savigliano (Cn). He plays Fabio Zontini guitars.